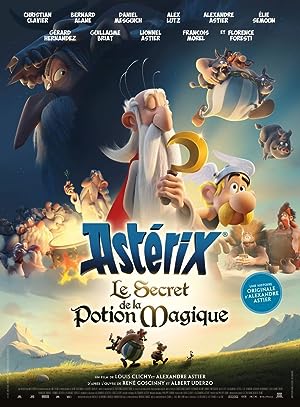 Asterix: The Secret of the Magic Potion (2018)
87 min|Animation, Adventure, Comedy|28 Jun 2019
6.7Rating: 6.7 / 10 from 10,084 users
Getafix/Panoramix decides it's time to pass the magic potion recipe on to a young, trustworthy druid. He looks all over Gaul with Asterix and Obelix as Demonix is out to get the recipe.
Director: Alexandre Astier, Louis Clichy
Creator: René Goscinny, Albert Uderzo, Alexandre Astier
Actors: Christian Clavier, Guillaume Briat, Alex Lutz

Asterix: The Secret of the Magic Potion (French: Astérix: Le Secret de la Potion Magique) is a 2018 French computer-animated adventure family comedy film co-directed by Alexandre Astier and Louis Clichy. The screenplay by Astier is based on the Asterix comic book characters created by René Goscinny and Albert Uderzo. This is the first Asterix production not to feature Roger Carel as the voice of Asterix, due to his retirement. Asterix is instead voiced by Christian Clavier, who previously played the character in Asterix and Obelix vs. Caesar and Asterix & Obelix: Mission Cleopatra.

The film was released in France on 5 December 2018 by SND. Icon Film Distribution released the film’s English dub in Australia starting 30 May 2019.