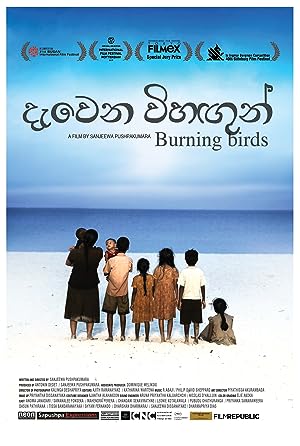 Burning Birds (දැවෙන විහඟුන්) is a 2018 Sri Lankan drama film written and directed by Sanjeewa Pushpakumara and co-produced by Pushpakumara and Antonin Dedet. It stars Anoma Janadari and Samanalee Fonseka with Mahendra Perera and Dasun Pathirana. The music was composed by R. Abaji and Philip David Sheppard.The film was premiered in the main competition of the 21st Busan International Film Festival in 2016.
The film was released in Sri Lanka on 29 June 2018 by the National Film Corporation of Sri Lanka through its Rithma circuit cinemas.The director’s cut was released from 26th July 2018 to 9th August 2018 only in three threaters – Regal Colombo, Lido Borella and Skylite Malabe, under the “Adults Only” banner.
The film successfully passed 50 days in theaters.It is the 1307th Sri Lankan film in the Sinhala cinema…..