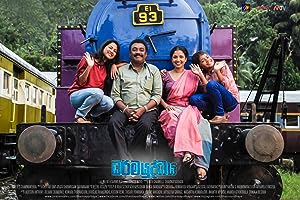 Dharmayuddhaya (2017)
147 min|Drama, Family, Thriller|14 Jul 2017
7.6Rating: 7.6 / 10 from 310 users
Harishchandra is a self-made businessman, loved and respected by all in his neighbourhood. His wife and two daughters are his most valued treasures. Due to a stranger who enters their lives, their lives change unexpectedly.
Director: Cheyyar Ravi
Creator: Jeethu Joseph, Prageeth S. Rathnayake
Actors: Jackson Anthony, Dilhani Ekanayake, Kusum Renu

Dharmayuddhaya (transl. War for Justice) is a 2017 Sri Lankan Sinhala-language drama thriller film directed by Cheyyar Ravi and produced by MTV Channel and The Capital Maharaja Organization Limited and distributed by M Entertainments. It is a shot-for-shot remake of the Indian Malayalam-language film Drishyam (2013) starring MOHANLAL by Jeethu Joseph. The film stars Jackson Anthony and Dilhani Ekanayake in the lead roles and features Kusum Renu, Kumara Thirimadura, Thisuri Yuwanika and Roshan Pilapitiya in supporting roles. The music was composed by Sachith Peris.

It is the 1282nd Sri Lankan film in the Sinhala cinema. The official trailer was released on 30 January 2017. The premiere of the movie was held on 13 July 2017 at Regal Cinema. The director, Cheyyar Ravi, had died in March 2017. Dharmayuddhaya successfully passed 100 days run in theatres.