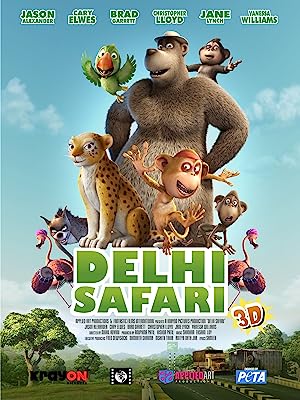 Delhi Safari (2012)
96 min|Animation, Adventure, Comedy|07 Dec 2012
5.5Rating: 5.5 / 10 from 1,828 users
A group of animals plan a trip to Delhi in order to ask the parliament why the forest they live in is on the verge of destruction.
Director: Nikkhil Advani
Creator: Nikkhil Advani, Rahul Awate, Girish Dhamija
Actors: Govinda, Akshaye Khanna, Urmila Matondkar

Delhi Safari is a 2012 Indian bilingual stereoscopic 3D computer-animated comedy feature film directed by Nikkhil Advani. It has been produced by Krayon Pictures (a Pune-based 3D animation studio). The film is based on a story and concept by Advani and features the voices of Akshaye Khanna, Govinda, Sunil Shetty, Boman Irani, and Urmila Matondkar. The screenplay of the film is written by Girish Dhamija and Suresh Nair. The film traces the journey of five animals and birds from Mumbai to Delhi. The music of the film is composed by Shankar-Ehsaan-Loy, while the lyrics are penned by Sameer. It is India’s first stereoscopic 3D animation feature film.The film released in India on 17 October 2012. Delhi Safari has been granted exemption from entertainment tax in the states of Maharashtra and Delhi. At the 60th National Film Awards, it won the National Film Award for Best Animated Film. The English version of the film has voices by Tom Kenny, Jason Alexander, Cary Elwes, Tara Strong, Christopher Lloyd, Jane Lynch, Vanessa Williams and Brad Garrett. The international sales of the film is being handled by Fantastic Films International. The film was released in the United States on 7 December 2012. Delhi Safari received a 15% score on review aggregation Rotten Tomatoes and a 35/100 in Metacritic.