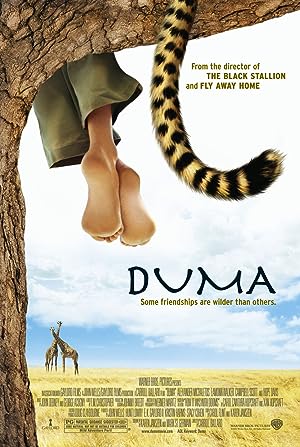 Duma is a 2005 American family drama adventure film about a young South African boy’s friendship with an orphaned cheetah, based on How It Was with Dooms by Carol Cawthra Hopcraft and Xan Hopcraft. It was directed by Carroll Ballard and stars Alexander Michaletos, Eamonn Walker, Campbell Scott, and Hope Davis.

The film was theatrically released on April 22, 2005, by Warner Bros. Pictures, Gaylord Films, and C.O.R.E. The film received mostly positive reviews from critics, but Warner Bros only gave the film a small release around the world (including a limited theatrical release in the US), resulting in earning $994,790 in the worldwide box office. The film won the Family Feature Film at the Genesis Awards in 2006.