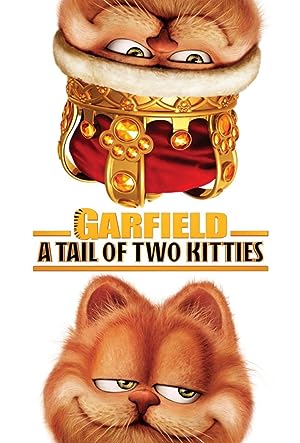 Garfield: A Tail of Two Kitties (released in some countries as Garfield 2) is a 2006 live-action/computer-animated comedy film directed by Tim Hill and written by Joel Cohen and Alec Sokolow.

It is the sequel to the 2004 film Garfield: The Movie. The film stars Breckin Meyer and Jennifer Love Hewitt reprising their roles as Jon Arbuckle and Dr. Liz Wilson respectively, and Bill Murray reprising his role as the voice of Garfield. New cast members include Billy Connolly, Ian Abercrombie, Roger Rees, Lucy Davis, and Oliver Muirhead in live-action roles and Tim Curry, Bob Hoskins, Rhys Ifans, Vinnie Jones, Joe Pasquale, Richard E. Grant, Jane Leeves, and Roscoe Lee Browne as the voices of the film’s new animal characters. In the film, Garfield, Odie, Liz, and Jon travel to the United Kingdom, where Prince, another cat that looks exactly like Garfield, is ruling over a castle after the death of his owner. His reign is soon jeopardized by an evil aristocrat, who plans to remodel the castle into condominiums, destroy the estate, and get rid of Prince. Produced by Davis Entertainment Company for 20th Century Fox, it was released in the United States on June 16, 2006.