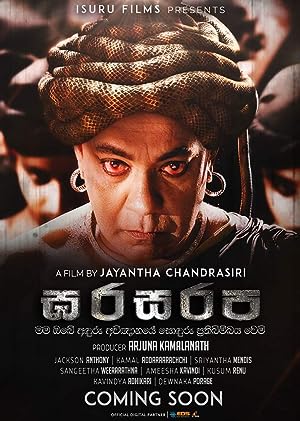 In the 1980, A Sinhala boy, Sandaras Edirisinghe, and a Tamil girl, Vidya, fall in love (It’s love at first sight) on their way to the church at Gadagama. The girl, possessed by the Kalu Kumaraya/Gharasarpa (Sri Lankan folklore version of Incubus), can only be healed by Rev. Camilus Dabare. Gharasarpa finds it hard to possess the girl because she has already fallen for Sandaras, proven true love can defeat the Gharasarpa (demonic possession). As Vidya has fully recovered, they leave the church after sharing postal addresses, hinting they will meet here after. In such a date in a cinema hall, Vidya informed because of the upcoming events of Sri Lankan Civil War in 80s, her family is forced to leave the country to settle in Canada. Because she is unable to leave Sandaras, Vidya asked Sandaras to marry her. As he is just a 19 years old school boy (Vidya was 18 years old by then) Sandaras shows hesitation towards the marriage. Somehow Vidya left the country and settled in Canada, and few years later become a psychiatrist and married a Tamil doctor.
Gharasarpa reach Sandaras in an unexpected moment and convey the news that Vidya now is in Canada but promise Sandaras, if she ever return the motherland he will definitely make them meet.
37 years later, Dr. Vidya Doraiappa returned Sri Lanka. As per the promise given by Gharasarpa, he is in a mission to make former lovers meet. In that mission Ghrasarpa may turn Sandaras’s usual routinal happy marriage life up side down.