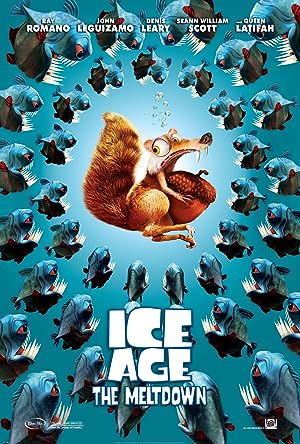 Ice Age: The Meltdown (2006)
91 min|Animation, Adventure, Comedy|31 Mar 2006
6.8Rating: 6.8 / 10 from 281,602 users
Manny, Sid and Diego discover that the ice age is coming to an end, and join everybody for a journey to higher ground. On the trip, they discover that Manny is not in fact the last of the woolly mammoths.
Director: Carlos Saldanha
Creator: Peter Gaulke, Gerry Swallow, Jim Hecht
Actors: Ray Romano, John Leguizamo, Denis Leary

Ice Age: The Meltdown is a 2006 American computer-animated adventure comedy film produced by Blue Sky Studios and distributed by 20th Century Fox. It is the sequel to Ice Age (2002) and the second film in the franchise. The film was directed by Carlos Saldanha, co-director of the first film, and written by Peter Gaulke, Gerry Swallow, and Jim Hecht. Ray Romano, John Leguizamo, Denis Leary, and Chris Wedge reprise their roles from the first Ice Age film, with newcomers Queen Latifah, Seann William Scott, and Josh Peck joining the cast. In the film, Manny, Sid, and Diego attempt to escape an impending flood, during which Manny finds love.

The film premiered in Belgium on March 1, 2006, and in the United States on March 31. It was eventually released in 70 countries, with the last release being in China on June 9. The Meltdown received mixed critical reactions but was a box office success by earning over $660 million. Three more sequels were released — Ice Age: Dawn of the Dinosaurs in 2009, Ice Age: Continental Drift in 2012, and Ice Age: Collision Course in 2016.