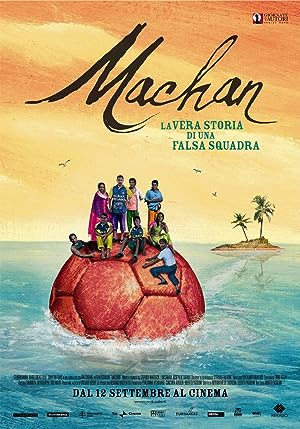 Machan is a 2008 Sri Lankan comedy film written, directed, and produced by Uberto Pasolini as his directorial debut about the fictional Sri Lankan National Handball Team that vanished in 2004.

Based upon a true story, the film was shot on locations in Sri Lanka and Germany. The inspiration came from the actual case of the 2004 incident, where a fake Sri Lankan national handball team tricked its way into a German tournament, lost all of their matches, and subsequently vanished. Production spent several weeks speaking with people in the less fortunate areas of Colombo and used the people met through that research to create the backgrounds of the main characters. When director Uberto Pasolini heard of the incident, he stated “I fell in love with the story so much that I decided to shoot it myself”. Under the working title of Handball, the film was produced and financed by Redgrave Films (UK), RAI Cinema (Italy), Babelsberg Films (Germany), and Shakthi Films (Sri Lanka), and had its premiere at the Venice Film Festival in August 2008, where it received a 10-minute standing ovation.

After the film completed its rounds of film festivals, it had commercial theatrical debut in Italy in September 2009, and was then picked up by UGC for theatrical distribution in Germany, France, Switzerland, Canada, Belgium, Norway and Sweden, and by Yume Pictures for theatrical release in the United Kingdom October 2009 and DVD distribution April 2010.