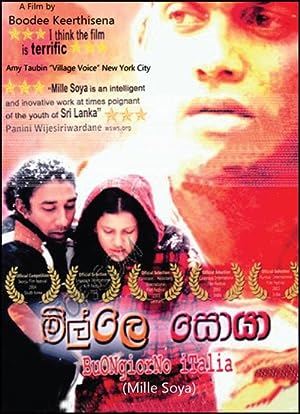 Mille Soya (2004)
110 min|Drama|21 Oct 2004
7.7Rating: 7.7 / 10 from 236 users
Mille Soya, is a film depicting a dangerous and hazardous journey by a young Sri Lankan group to rich Europe. They are subject to deceptions by the intermediaries, betrayals by friends, arrests while crossing the borders and even ...
Director: Boodee Keerthisena
Creator: Boodee Keerthisena
Actors: Mahendra Perera, Sangeetha Weeraratne, Jackson Anthony

The story revolves around a group of young musicians – rock ‘n rollers who venerate Bob Marley and wish to become a famous band. But their lives on the lowest rungs of Sri Lankan society, with its poverty and violence, offer them little if no opportunities. Friends returning from Italy talk about the money to be made. But the journey there is not straightforward because it’s not legal. The film follows them on their dangerous journey with all its hazards, its comradeship, its tears and laughter, and also death. When in Naples, Italy, the appalling conditions of their day-to-day living, the hard labor, but also the basic human frailties, strengths, loves and hates, are also shown. On returning to Sri Lanka, somehow they seem to be better equipped to survive either in Sri Lanka, or to return to Italy, this time as legal immigrants..