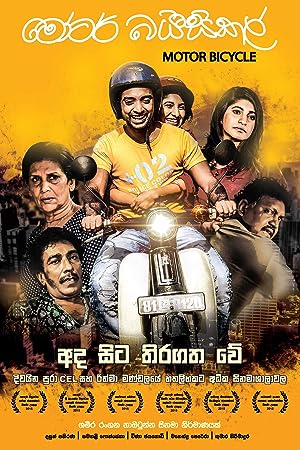 Motorbicycle (2016)
105 min|Drama|26 Aug 2016
7.2Rating: 7.2 / 10 from 102 users
Rangana is a young musician from the working classes who dreams big. His aim is to rise above his station, even as he toils the low-rent barroom circuit with his band, playing night after night to under-appreciative crowds to make...
Director: Shameera Rangana
Creator: Shameera Rangana
Actors: Dasun Pathirana, Samanalee Fonseka, Veena Jayakody

Motor Bicycle (Sinhalese: මෝටර් බයිසිකල්) is a 2016 Sri Lankan romantic action drama film written and directed by Shameera Rangana Naotunna as his maiden cinematic direction. Film produced by Suranga Jayasuriya for Imagery Films and Roy Brothers. Film starring Dasun Pathirana, Samanali Fonseka in lead roles along with Veena Jayakodi, Mahendra Perera and Kumara Thirimadura in supportive role. it is set in modern-day urban Colombo and focuses on a boy dreams to ride a motor bicycle with his love. It is the 1256th Sri Lankan film in the Sinhala cinema. In 2015, the film won the Best Film award and the Best Direction award at 2015 SAARC Film Festival.