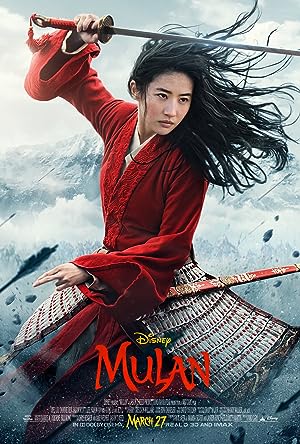 Mulan is a 2020 American fantasy action drama film produced by Walt Disney Pictures. Directed by Niki Caro from a screenplay by Rick Jaffa, Amanda Silver, Lauren Hynek, and Elizabeth Martin, it is a live-action adaptation of the 1998 Walt Disney Animation Studios film of the same name, itself based on the Chinese folklore story Ballad of Mulan. The film stars Yifei Liu in the title role, alongside Donnie Yen, Tzi Ma, Jason Scott Lee, Yoson An, Ron Yuan, Gong Li, and Jet Li in supporting roles. In the film, Hua Mulan, the eldest daughter of an honored warrior, masquerades as a man to take her ailing father’s place during a general conscription to counter the Rouran army in Imperial China.

Plans for a live-action remake began in 2010 but the project stalled in “development hell” for most of the decade. Filming took place in New Zealand and China from August to November 2018. Over the course of production, the film was the subject of several controversies, including changes to the source material and filming in Xinjiang in light of the Uyghur genocide and Xinjiang internment camps. The film also received criticism for its production team largely consisting of white people, such as the hiring of Caro, rather than an Asian director.