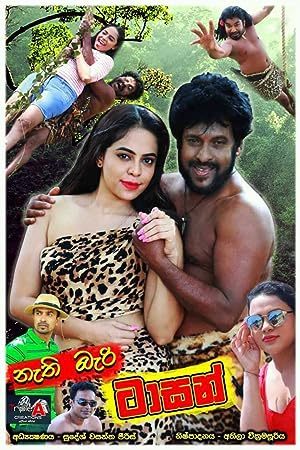 Nathi Bari Tarzan (2019)
84 min|Comedy|22 Feb 2019
Rating:
Tarzan who had returned to the forest because he had been disappointed with life in the city. He begins to fight against those who have begun to cut trees in the wilderness and hunt wild animals. He even finds a new love interest ...
Director: Sudesh Wasantha Pieris
Creator: Sarath Samarawickrama
Actors: Tennyson Cooray, Rajitha Hiran Chamikara, Menaka Maduwanthi

Nathi Bari Tarzan (නැති බැරි ටාසන්) is a 2019 Sri Lankan Sinhala comedy film directed by Sudesh Wasantha Pieris and produced by Athila Wickramsooriya for Triple A Creations. It is the third installment of Weda Beri Tarzan franchise, and sequel to 2008 film Wada Bari Tarzan Mathisabayata. Tennyson Cooray reprise his role as Tarzan and Menaka Maduwanthi in lead roles along with Rajitha Hiran and Isuru Lokuhettiarachchi. Music composed by Keshan Perera. It is the 1323rd Sri Lankan film in the Sinhala cinema.