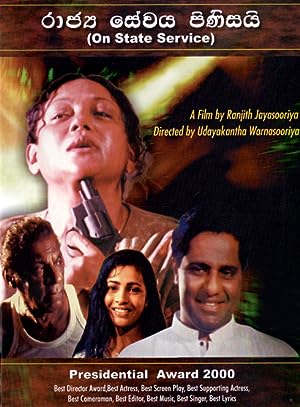 Raajya Sewaya Pinisai (2000)
N/A|Drama|11 Aug 2000
6.1Rating: 6.1 / 10 from 19 users
Innocent women will translate to a prostitute because of corrupted politician. After that her daughter also raped by that politician. That cases change her life. All after she realised reality.
Director: Udayakantha Warnasuriya
Creator: Udayakantha Warnasuriya
Actors: Sanath Gunathilake, Geetha Kumarasinghe, Joe Abeywickrama

The story is based on some true-to-life incidents that happened in Sri Lanka during the 1987–1989 JVP insurrection.