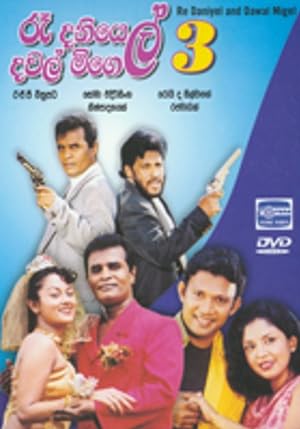 Re Daniel Dawal Migel 3 (Sinhalese: රෑ දනියෙල් දවල් මිගෙල් 3) is a 2004 Sri Lankan Sinhala comedy, action film directed by Roy de Silva and produced by Soma Edirisinghe for E.A.P Films. It is the third and final film of Re Daniel Dawal Migel film series and sequel to 2000 Re Daniel Dawal Migel 2 film. The comic duo Bandu Samarasinghe, and Tennyson Cooray reprised lead roles along with Dilhani Ekanayake, Jayantha Bopearachchi and Sanoja Bibile. Music for the film is done by Somapala Rathnayake. The film also became one of Sri Lanka’s blockbuster hit in cinema theatres, but failure when comparing first two installments. It is the 1031st Sri Lankan film in the Sinhala cinema.