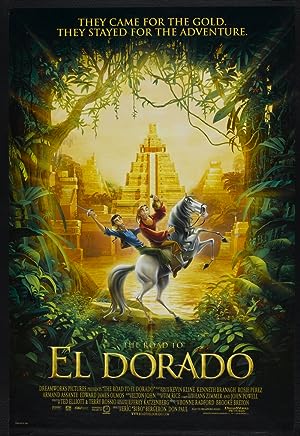 The Road to El Dorado is a 2000 animated adventure-musical comedy film produced by DreamWorks Animation and released by DreamWorks Pictures. It was directed by Bibo Bergeron and Don Paul (in their feature directorial debuts) and additional sequences directed by Will Finn and David Silverman. The film stars Kenneth Branagh, Kevin Kline, Rosie Perez, Armand Assante, Edward James Olmos, and Jim Cummings.

The soundtrack features songs by Elton John and Tim Rice, as well as composers Hans Zimmer and John Powell. John is also credited periodically narrating the story in song throughout the film. The film follows two con artists who, after winning the map to El Dorado in Spain, wash ashore in the New World, where they use the map to lead them to the city of El Dorado, where its inhabitants mistake them for gods.