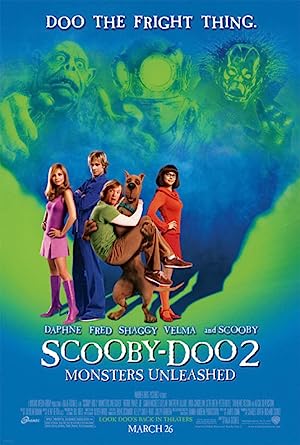 Scooby-Doo 2: Monsters Unleashed (also referred to as Scooby-Doo 2) is a 2004 American live-action/computer-animated horror comedy film based on the animated television franchise Scooby-Doo. It is the second installment in the Scooby-Doo live-action film series and a sequel to 2002’s Scooby-Doo and was directed by Raja Gosnell, written by James Gunn, and released by Warner Bros. Pictures. The film stars Freddie Prinze Jr., Sarah Michelle Gellar, Linda Cardellini, Matthew Lillard, Seth Green, Tim Blake Nelson, Peter Boyle, and Alicia Silverstone, with Neil Fanning reprising his role as the voice of Scooby-Doo.

The film was released on March 26, 2004. Like the first film, it received generally negative reviews from critics and grossed $181 million, considerably less than its predecessor. Its poor reception resulted in a third film, set to be written and directed by Gunn, being canceled.