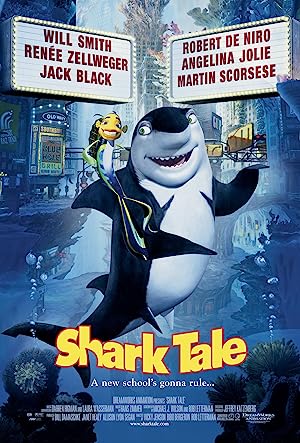 Shark Tale (2004)
90 min|Animation, Adventure, Comedy|01 Oct 2004
6.0Rating: 6.0 / 10 from 185,590 users
When a son of a gangster shark boss is accidentally killed while on the hunt, his would-be prey and his vegetarian brother decide to use the incident to their own advantage.
Director: Bibo Bergeron, Vicky Jenson, Rob Letterman
Creator: Michael J. Wilson, Rob Letterman, Scott Aukerman
Actors: Will Smith, Robert De Niro, Renée Zellweger

Shark Tale is a 2004 American computer-animated comedy film produced by DreamWorks Animation and distributed by DreamWorks Pictures. Directed by Vicky Jenson, Bibo Bergeron, and Rob Letterman (in Letterman’s feature directorial debut), the film contains an ensemble cast starring the voices of Will Smith, Jack Black, Robert De Niro, Renée Zellweger, Angelina Jolie, and Martin Scorsese. It tells the story of a fish named Oscar (Smith) who falsely claims to have killed Frankie (Imperioli), the son of a shark mob boss named Don Lino (De Niro), to advance his community standing and teams up with the mobster’s other son Lenny (Black) to keep up the other facade.