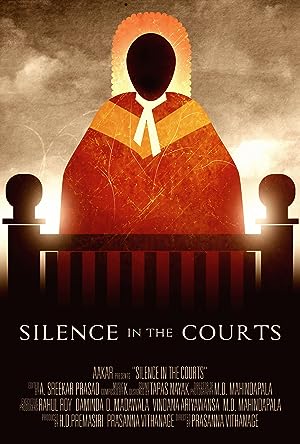 Silence in the Courts (2015)
58 min|Documentary|25 Oct 2015
Rating:
Two women were denied justice and a journalist fails in his struggle to deliver justice to them, a filmmaker embarks on a quest to unearth the cause for that injustice.
Director: Prasanna Vithanage
Creator: Prasanna Vithanage
Actors: Thilakshini Ratnayake

Two women from a farming village about 100km away from country’s capital are raped within one year by court judge presiding over cases which involved their husbands as accused parties. They have gone to Judiciary Services Commission, the BAR association and to the president of the country seeking justice. Those institutions and people were non-responsive to their complaints. Angered husbands of two women swear revenge and their efforts to avenge the judge become futile. An editor of a leading alternative newspaper publishes the story of one of the women. He continues to follow up the incident and publish a series of articles exposing the judge. Attorney General refuses take action in reprimanding the judge. Newspaper editor publishes the cover up and with the buildup peer pressure, three years after the incidents took place, Judiciary Services Commission appoints a tribunal consisting three high court judges to investigate the accusations made by the newspaper. The tribunal finds the ..