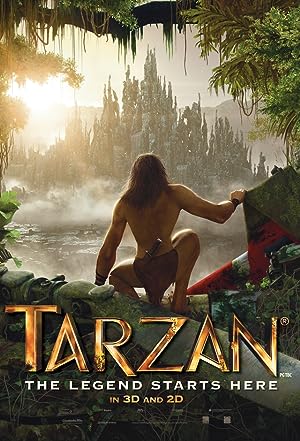 65,000,000 years ago, a mountain-sized meteor, bristling with unknown energies, crashed into the Earth in what is now the Yucatán Peninsula in Mexico, with a major chunk of the object landing in Central Africa. The impact and resulting ecological catastrophe causes the extinction of the dinosaurs.
In present day, wealthy industrialist John Greystoke has been funding an expedition into the jungles of Africa to locate the meteor, now a legend, and harness its unique energy as a solution to the looming energy crisis. Despite the best efforts by scientist and adventurer James Porter, the expedition is a failure, and John is preparing to leave Africa with his wife, Alice, and their son, John Jr. As their pilot takes them over the jungle, the family sees a lone male mountain gorilla journeying to find a new family. The huge ape makes a display of threat at the passing helicopter and continues on his way.
Not far away, the rogue, Tublat, comes across a troop of his fellow gorillas, led by a silverback male named Kerchak. In a fight for dominance, Kerchak defeats the rogue and begins to return to his mate, Kala, and their newborn child, only for Tublat to deal him a fatal blow by smashing a huge stone over Kerchak’s head. Kala and the others can only look on in horror as Tublat asserts his control over the family.