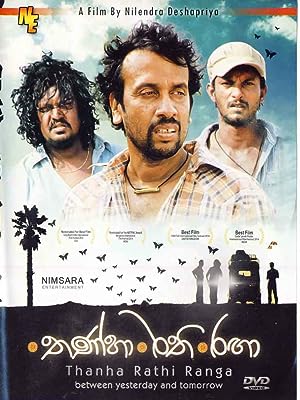 Thanha Rathi Ranga (2014)
95 min|Drama|17 Oct 2014
8.3Rating: 8.3 / 10 from 625 users
Three friends embark on a journey to a land that was once forbidden but a sudden encounter forces them to return to yet another land of turmoil and terror.
Director: Nilendra Deshapriya
Creator: Sarath Kothalawala, Kumara Thirimadura
Actors: Mohamed Adamaly, Kamal Addaraarachchi, Thumindu Dodantenne

Thanha Rathi Ranga (Between Yesterday and Tomorrow) (Sinhalese: තණ්හා රතී රඟා) is a 2014 Sri Lankan Sinhala drama thriller film directed by Nilendra Deshapriya, in his directorial debut, and produced by Sunil T. Fernando for Sunil T. Films. It was written by Sarath Kothalawala and Kumara Thirimadura and features themselves in lead roles with Namal Jayasinghe. The film also supported by many veteran artists like Swarna Mallawarachchi, Anoja Weerasinghe, Neeta Fernando and Kamal Addararachchi. It is the 1113rd Sri Lankan film in the Sinhala cinema.