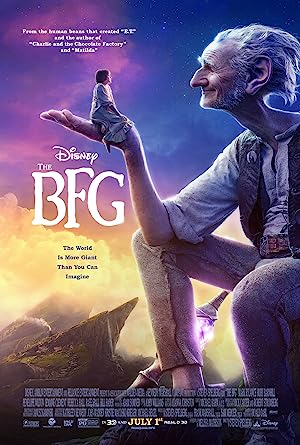 Sophie, a 10-year-old orphaned girl who lives in a London orphanage, stays awake reading through the nights due to her insomnia. At 3:00 am, or what she calls the “witching hour”, she sees an elderly giant outside her window. The giant captures her and takes her into Giant Country. There, he explains that Sophie must stay with him for the rest of her life because she saw him and must not be allowed to reveal the existence of giants. He also explains that she will put herself at risk if she goes out in the open, as nine other giants inhabit Giant Country, all of whom are maneaters and favor the taste of children.

When Sophie awakes, the Fleshlumpeater, the infantile leader of the man-eating giants (and the same one from Sophie’s nightmare), enters the older giant’s home and smells Sophie. The Fleshlumpeater nearly devours Sophie before exiting. The giant gives Sophie some replacement clothes, as hers are ruined, and Sophie convinces him to take her to Dream Country to catch dreams together. As they leave, they accidentally wake up the Bloodbottler, the more intelligent and cunning second-in-command to the Fleshlumpeater, who awakens the other man-eating giants. They torment and bully the friendly giant by throwing him around like a football and rolling him down a hill in a garbage truck. As the pair escape during a thunderstorm which drives the man-eating giants into the cave, the Fleshlumpeater and the Bloodbottler find Sophie’s blanket (which she had dropped before) and plan to find her. Climbing up the mountain, Sophie tells the giant that he shouldn’t allow the other giants to bully him.