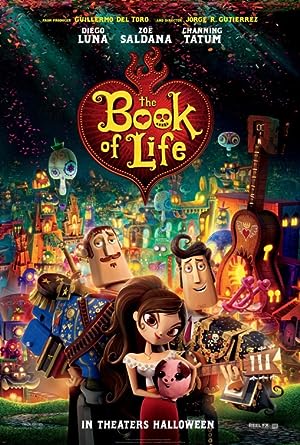 The Book of Life (2014)
95 min|Animation, Adventure, Comedy|17 Oct 2014
7.2Rating: 7.2 / 10 from 72,740 users
Manolo, a young man who is torn between fulfilling the expectations of his family and following his heart, embarks on an adventure that spans three fantastic worlds where he must face his greatest fears.
Director: Jorge R. Gutiérrez
Creator: Jorge R. Gutiérrez, Doug Langdale
Actors: Diego Luna, Zoe Saldana, Channing Tatum

Mary Beth, a museum tour guide, takes a group of school detention students on a secret museum tour, telling them, with wooden figures, the story of a Mexican town called San Angel from the Book of Life, holding every story in the world.

On the Day of the Dead, La Muerte, ruler of the Land of the Remembered, and Xibalba, ruler of the Land of the Forgotten, set a wager for their own worlds after seeing Manolo Sánchez and Joaquín Mondragon competing over María Posada. La Muerte bets on Manolo while Xibalba bets on Joaquín. However, Xibalba cheats by giving Joaquín his Medal of Everlasting Life, granting the wearer invincibility. María frees a herd of captive pigs, resulting in her being sent to a boarding school in Spain. Parting ways, Manolo gives her one of the rescued baby pigs, which he named Chuy, and she gives him a guitar engraved with the phrase “Always play from the heart”.
Years later, Manolo’s dreams are suppressed by his father Carlos, who trains him to be a bullfighter to honor their family, while Joaquín becomes a hero with the Medal’s aid. On Manolo’s first bullfight, María returns. Manolo defeats the bull but refuses to kill it, dismaying Carlos and the crowd but impressing María. That night, María is pressured by her father and mayor, General Ramiro Posada, to marry Joaquín for his protection from the Bandit King Chakal. María and Manolo both profess their love before dawn but are interrupted when Xibalba sends his dual-headed snake staff who bites her once and sends her into a coma. Devastated by María’s apparent death, Manolo allows Xibalba to kill him, believing he will be reunited with María in death.