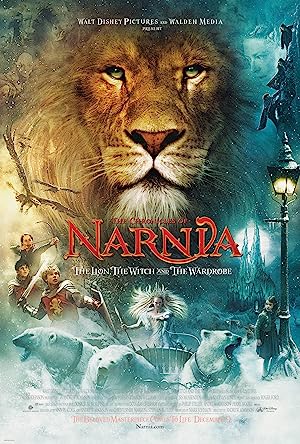 The Chronicles of Narnia: The Lion, the Witch and the Wardrobe (2005)
143 min|Adventure, Family, Fantasy|09 Dec 2005
6.9Rating: 6.9 / 10 from 402,248 users
Four kids travel through a wardrobe to the land of Narnia and learn of their destiny to free it with the guidance of a mystical lion.
Director: Andrew Adamson
Creator: Ann Peacock, Andrew Adamson, Christopher Markus
Actors: Tilda Swinton, Georgie Henley, William Moseley

The Chronicles of Narnia is a series of seven fantasy novels by British author C. S. Lewis. Illustrated by Pauline Baynes and originally published between 1950 and 1956, The Chronicles of Narnia has been adapted for radio, television, the stage, film, and computer games. The series is set in the fictional realm of Narnia, a fantasy world of magic, mythical beasts, and talking animals. It narrates the adventures of various children who play central roles in the unfolding history of the Narnian world. Except in The Horse and His Boy, the protagonists are all children from the real world who are magically transported to Narnia, where they are sometimes called upon by the lion Aslan to protect Narnia from evil. The books span the entire history of Narnia, from its creation in The Magician’s Nephew to its eventual destruction in The Last Battle.