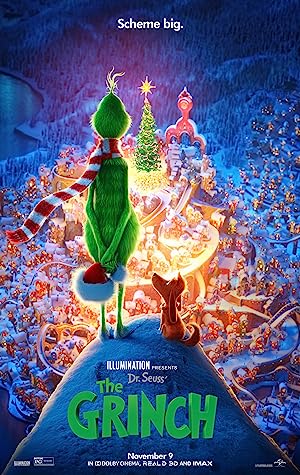 The Grinch (also known as Dr. Seuss’ The Grinch) is a 2018 American computer-animated Christmas fantasy comedy film produced by Illumination and distributed by Universal Pictures. Based on the 1957 book How the Grinch Stole Christmas! by Dr. Seuss, it is the third screen adaptation of the story, following the 1966 television special starring Boris Karloff and the 2000 live-action feature-length film starring Jim Carrey. It marks Illumination’s second Dr. Seuss film adaptation, following The Lorax (2012). Directed by Yarrow Cheney and Scott Mosier, written by Michael LeSieur and Tommy Swerdlow, and narrated by Pharrell Williams, the film stars the voices of Benedict Cumberbatch, Rashida Jones, Kenan Thompson, Cameron Seely, and Angela Lansbury. The film was Mosier’s directorial debut. The plot follows the Grinch and his dog Max as they plan to ruin Whoville’s Christmas celebration by stealing all the town’s decorations and gifts.

The Grinch was released and distributed by Universal Pictures in the United States on November 9, 2018, in RealD 3D, IMAX, IMAX 3D, Dolby Cinema, and 4DX theaters. It grossed over $511 million worldwide, becoming the highest-grossing holiday film of all time, as well as the highest-grossing Dr. Seuss film adaptation. It received mixed reviews from critics, who praised the animation and the vocal performances (particularly Cumberbatch’s), but felt the film added little or nothing new to the source material. This was the final Dr. Seuss film adaptation released during the lifetime of Seuss’s widow Audrey Geisel, who served as executive producer of the film and died on December 19, 2018, five and a half weeks after the film’s release.