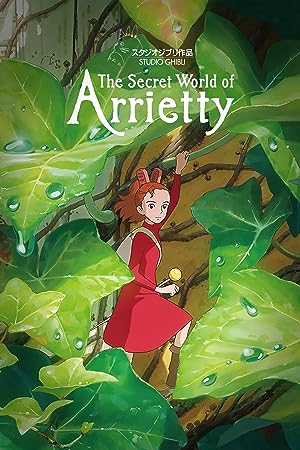 Arrietty, titled Arrietty the Borrower (Japanese: 借りぐらしのアリエッティ, Hepburn: Kari-gurashi no Arietti) in Japan and The Secret World of Arrietty in North America, is a 2010 Japanese animated fantasy film directed by Hiromasa Yonebayashi as his feature film debut as a director, animated by Studio Ghibli for the Nippon Television Network, Dentsu, Hakuhodo DY Media Partners, Walt Disney Japan, Mitsubishi, Toho and Wild Bunch, and distributed by Toho. The novel was adapted as a screenplay by Hayao Miyazaki and Keiko Niwa, based on the 1952 novel The Borrowers by Mary Norton, an English author of children’s books, about a family of tiny people who live secretly in the walls and floors of a typical household, borrowing items from humans to survive. The film stars the voices of Mirai Shida, Ryunosuke Kamiki, Shinobu Otake, Keiko Takeshita, Tatsuya Fujiwara, Tomokazu Miura, and Kirin Kiki, and tells the story of a young Borrower (Shida) befriending a human boy (Kamiki) while trying to avoid being detected by the other humans.