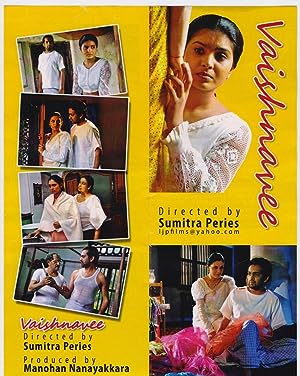 Vaishnavee (2017)
115 min|Drama|05 Mar 2018
7.6Rating: 7.6 / 10 from 56 users
1930's Sri Lanka. A puppeteer is arranged to be married to a young girl, but after she elopes with her lover, the grieving man carves a puppet in her likeness that comes to life, setting in motion a fantastical chain of events.
Director: Sumitra Peries
Creator: Lester James Peries, Tony Ranasinghe
Actors: Samadhi Arunachaya, Rohana Beddage, Vasanthi Chathurani

Vaishnavee (Sinhala: වෛෂ්ණාවී, lit. ‘The Goddess’) is a 2018 Sri Lankan Sinhala drama thriller film directed by veteran director Sumitra Peries and produced by Mano Nanayakkara. The film stars Yashoda Wimaladharma, Thumindu Dodantenna, and Jayalath Manoratne in lead roles along with Vasanthi Chathurani and Cletus Mendis. Popular teledrama actress Samadhi Arunachaya made her cinema debut with the film. The music is composed by Nimal Mendis and is his last music direction before his death. The film was shot in 2012, and Sumitra Peries was the first director to shoot with the latest Red Epic camera in Sri Lanka.  The film had the last script written by Tony Ranasinghe before his death.

The film received mostly positive reviews from critics. The film was released in 30 theaters throughout the country.