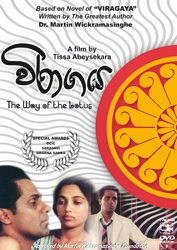 Viragaya (Devoid of Passions) is a 1956 novel written by Martin Wickremasinghe. The novel is considered an outstanding work in modern Sinhalese fiction due to the significance of its theme and the sophistication of its technique. The story is based on a virtuous character called Aravinda, a Sinhalese youth raised in a traditional Buddhist family in the South.

First published in 1956 in Sinhala, the novel was translated into the English language in 1985 by Professor Ashley Halpe, under the title The Way of the Lotus. It was later translated into the Tamil language in 1992 and French in 1995. Viragaya is considered the first Sinhala novel which was completely translated and published in the French language. The novel was made into a movie in 1987 by Tissa Abeysekera. Viragaya is considered one of the best novels of the writer. It exhibits the influences of Existentialism on Wickramasinghe specially through the character of Lokusuriya, the retired postmaster. Sarojini, Menaka, Bathee, Siridasa are the other prominent characters in the novel. The novel is presented through Sammy, a friend of Aravinda’s cousin Siridasa. The narration resembles that of Lockwood in Emily Brontë’s Wuthering Heights.