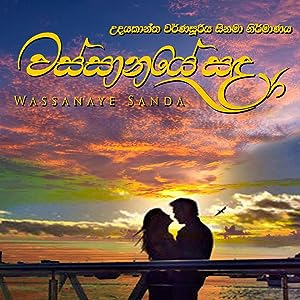 Wassanaye Sanda (2017)
109 min|Drama|25 May 2018
5.7Rating: 5.7 / 10 from 23 users
Sandesh is a fun loving young boy who belongs to an upper middle class family. He is in love with a beautiful girl called Mihiri. When Sandesh proposes to Mihiri, she tells him about her responsibility of looking after her brother...
Director: Udayakantha Warnasuriya
Creator: Udayakantha Warnasuriya
Actors: Anuj Ranasinghe, Piyumi Hansamali, Angelo Sanjeev Barnes

Wassanaye Sanda (Moon of the Autumn) (Sinhalese: වස්සානයේ සඳ ) is a 2018 Sri Lankan Sinhala romantic drama film directed by Udayakantha Warnasuriya and co-produced by the director along with Mahesh K. Bandara and H. D. Premasiri. It stars Oshadi Himasha, Piumi Hansamali and Angelo Sanjeev Barnes with Anuj Ranasinghe in lead roles along with Anula Karunathilaka and Ravindra Randeniya. The music was composed by veteran musician Rohana Weerasinghe.
A number of the scenes from the film were shot in Australia.[The film had its international premiere on 8 October 2017 in Sydney, Australia, with a subsequent screening in Melbourne on 14 October.
The film was not released in Sri Lanka until 25 May 2018, with a simultaneous book launch of Wassanaye Sanda taking place when the film debuted at the Regal Cinema in Colombo. It is the 1305th Sri Lankan film in the Sinhala cinema.